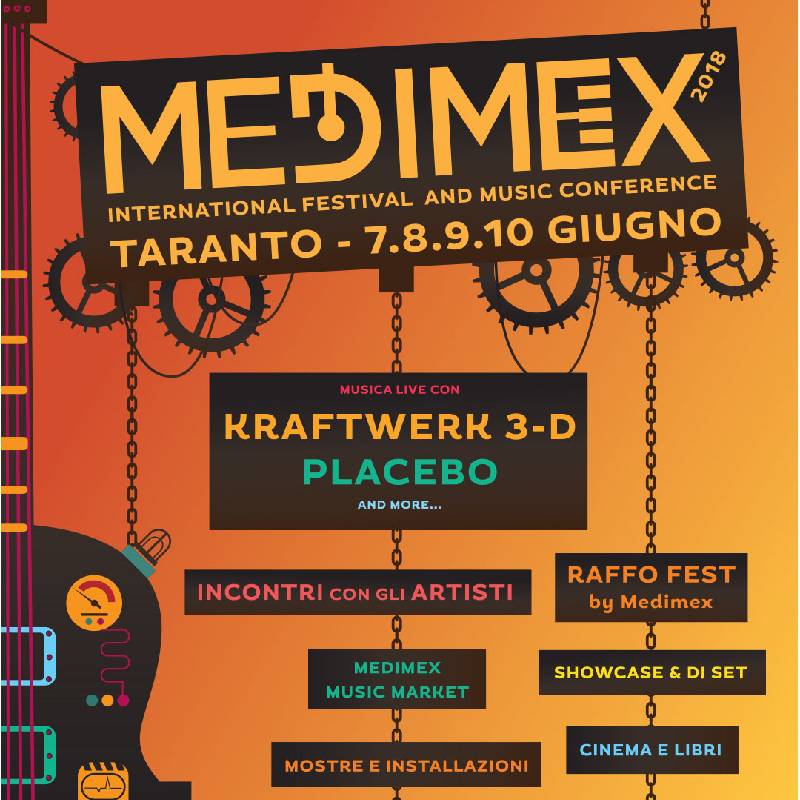 First edition of the new traveling format, in the town of Taranto, for 4 days of live music, djsets, exhibitions, a vinyl marketplace, screenings and lectures. This is Medimex 2018, organized in Taranto with a full program of live music concerts which included Kraftwerk, Placebo and Nitro concerts.

A number of Meet the Author gatherings featuring the protagonists of the Italian and international music scene including The Sex Pistols drummer, Paul Cook. The program also included an important exhibition on Kurt Cobain and Grunge, set up at MArTA in Taranto. But once again Medimex was essentially focused on the music industry and music professionals, artists and companies and on the national and international music market prospects and future challenges. In this edition Puglia Sounds Musicarium, the school of music crafts (with an advanced version only for professionals), is back together with Songwriting Camp, during which young musicians work side by side with famous authors and producers.

Among the curiosities, the arrival at Medimex 2018 of the internauts of the most famous and beloved satirical website in Italy, Lercio.it, with Lercio internauts performing during the change of stage, and the breaks scheduled between one concert and the other of the artists performing on the main stage of the Rotonda del Lungomare in Taranto. Funny newscasts, unlikely features and the best of the site’s content, will take the audience on a fun and hilarious journey through the news programs. Of course under the banner of “dirty job of the news outlets.

And then, the event Medimex Music Market, organized by PopUp The Sunday, Display Agency, Discipline, Node, Coolclub, Fiera del Disco SUD Italia: a unique event that has combined the world of independent labels to that of collectors carefully selected for a trade fair with exhibitors from all over Italy and Europe, together with a program of djsets, live shows and conferences with international guests, with a focus on the most interesting labels on the local scene. “Independent Label Market” is the London brand that has brought together over 300 of the most important independent labels from around the world that sell directly to the public their just released productions. Medimex Music Market also saw a comeback of the Record Fair, founded in Taranto, one of the largest in the country, with the participation of exhibitors from all over Italy, including some of the biggest vinyl collectors in Italy. The Medimex Music Market programme also featured djsets with national and international DJs representing the labels hosted and proposing sets of highly selected music from funky to reggae, from indie to electronic, from soul to punk, all carefully selected under PopUp The Sunday artistic direction, for very special brunches and music aperitif cocktails.

Edition that recorded 60,000 participants, over 200 artists and 400 musical operators. And 120 national and international newspapers and media that spoke about Medimex and 800,000 interactions on social networks.