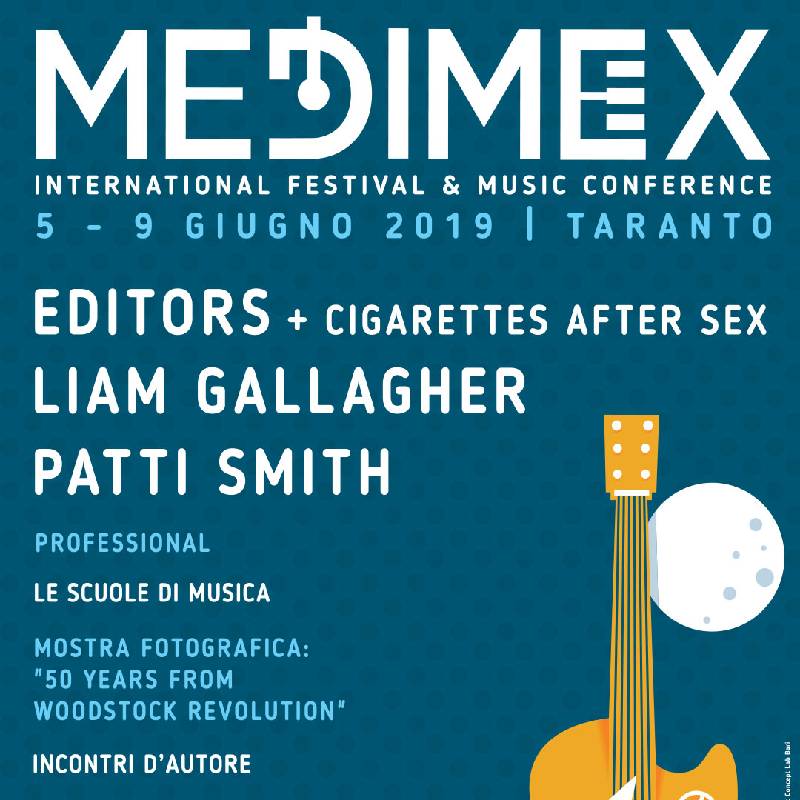 In 2019 Medimex is back in Taranto, one of the most beautiful towns in our country. The event, open to the general public and music industry professionals, featured a live shows schedule with international and leading national artists, showcases for Puglia artists and a well-structured tribute to Woodstock which included a photo exhibition on Woodstock and Jimi Hendrix. Alongside the Meet the Author gatherings with the protagonists of the music scene, Medimex 2019 hosted a number of events addressed to professionals, artists and music businesses on the prospects of the national and international market and the challenges ahead.

Hence, also in this new edition, Medimex was once again an opportunity to meet festival directors, agencies, record labels, Italian and international stakeholders and participate in specific events aimed at music professionals. The program included panels and workshops, with influential experts who hosted interesting debates on some of the central themes of the music business fabric. And then, again, Puglia Sounds Musicarium, school of music crafts (with a new upgraded version targeted only to professionals) and the Songwriting Camp, during which young musicians worked side by side with renowned authors and producers.

Among the venues of the 2019 edition, the Rotonda del Lungomare, the Peripato Gardens, the National Archaeological Museum MArTA, the Fusco Theater, the Aragonese Castle, the Higher Institute of Musical Studies “G. Paisiello”, the University and the Literary Café Cibo per la Mente.

Three outstanding exhibitions could also be visited Medimex 2019: “Woodstock & Hendrix: The Revolution” with photographs by Baron Wolman and Donald Silverstein curated by ONO Arte Contemporanea, hosted by the National Archaeological Museum MarTa. And, again, “Rocks and Shots,” with photos by Henry Ruggeri and “WONDERWALL – AN EXHIBITION ABOUT OASIS” with photographs, memorabilia and souvenirs. Both exhibitions, curated by Puglia Rock, were set up inside Teatro Fusco.